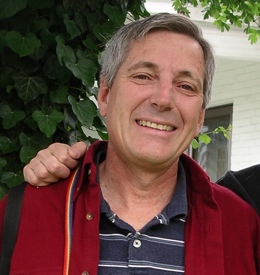 We are sad to report that Jay Lepreau, Research Professor and Director of the Flux Research Group, passed away Monday morning Sept 15th due to complications of cancer. Jay was an enthusiastic and productive researcher, a dedicated mentor of students and staff, and an avid participant in recreational activities such as music and outdoor sports. His loss will be felt by all who knew him, both within the computer science community and elsewhere.

What follows is a reprint of a tribute article written by David Andersen, to appear in an upcoming issue of "ACM Computer Communication Review."


"I don't want to break precedent or anything by starting this on time, or doing anything other than at the last minute..."
-- Jay Lepreau, OSDI Welcome Comments, 1994.

Jay Lepreau was uncharacteristically early in his passing, but left behind him a trail of great research, rigorously and repeatably evaluated systems, and lives changed for the better.

Most in our community know Jay as the creator of Emulab; the more systems-oriented may also know that he conceived and served as the first program chair for OSDI in 1994. Those in the security community see the path that his work in microkernels took through Fluke, to Flask, to today's SELinux. While diverse and prolific, Jay's research can also be easily summed up with a few traits: he devoted his boundless energy to creating real systems that had major practical impact. In fact, Jay and his research group, heavy in talented systems programmers, were unique among the academic community in their willingness and ability to create and maintain artifacts that were used, over decades, by thousands of other researchers. Emulab alone revolutionized the evaluation sections of networking and distributed systems papers, simultaneously setting a high bar for rigorous evaluation while also making that bar achievable.

Jay was born March 27, 1952, to Dr. Frank J. Lepreau, Jr., and Miriam Barwood. He spent his childhood both in Massachusetts, and in Central Haiti, receiving a lasting education in charity, kindness, and medical care helping his father treat patients at the Hospital Albert Schweitzer. His care for others eventually brought him to Utah, where he began working with the Southern Utah Wilderness Alliance to protect the red-rock deserts of southern Utah, and at twenty eight, he entered the Department of Computer Science at the University of Utah as an undergraduate.

He got his start in systems programming and real systems while still an undergraduate, hanging around the computing facility and then officially working as a programmer for the then-director of computing facilities, Randy Frank. Jay graduated in 1983 and became the manager of the systems programming group. Randy and Jay established the first Ethernet networks on campus, and together ran the USENIX 1984 Summer Conference. Within four years, Jay was the acting head of computing facilities for the CS department, learning the impossible task of trying to satisfy a diverse and intelligent group of strong-willed, impatient users who know, or believe they know, as much as the facilities director---while trying to keep the computers running 24x7 on a limited budget. These were, in other words, the exact same challenges that Jay would surmount so well in making Emulab the resource we all depend upon today.

Jay's research accomplishments are many, though in the age of Google it seems unnecessary to belabor them, aside from noticing a suspiciously alliterative pattern that was the hallmark of his Flux group for many years---the Flux OSKit, which dissected the available UNIX-like OSes of its day into components that could be reassembled at will; the Fluke microkernel; the Flask secure microkernel; the Flick optimizing IDL compiler; and the Flexlab replay and emulation additions to Emulab. Jay got started earlier than these projects, receiving funding from HP to port the BSD operating system to PA-RISC. For years following, Jay proudly noted that his group at Utah was the first and last site to run HP-BSD. Jay's team then did major development on the Mach microkernel. Here too did Jay's emphasis on real systems and impact show up: the Flux group had successfully ported the full GNU toolchain to run on their Mach-based microkernel, and again on the Fluke microkernel.

But for many of us, Jay's research accomplishments were merely a wonderful byproduct of his people accomplishments. In talking to people about Jay, a common theme that emerges is that Jay was a linchpin in hooking us in to a career in computer science. Bryan Ford, now joining the faculty at Yale, wrote:

"Before meeting him, I was just a young geek with ideas and a fancy for operating systems; he invited me into his group, gave me a workstation named after a brand of liquor, infected me with his passion for systems research, taught me how to develop and express the crazy ideas we came up with together, and patiently nurtured me into a member of the global systems community. No one else in the world deserves my gratitude more for getting me started on my professional path."

Jay leaves a trail of people he has touched in this way; at one point, two of the systems graduate students at MIT had worked with Jay as undergraduates, and another had worked with Jay as a high school student---the latter of whom became, to my knowledge, the first high school student to give a work-in-progress talk at SOSP. Jay's former students, staff, and visitors now represent faculty at four universities, current grad students at nine top CS departments, and occupy spots at nearly all of the largest computing companies in the United States. This legacy is unsurprising---a large part of Jay's brilliance was his ability to forge a team that coupled freely-flowing idea sources to extremely talented and experienced implementors.

"He leaves behind a great team of people and a legacy of tools and principles in the area of experimental networking research that will live far longer than most other tools developed in academia. Jay worked tirelessly towards making Emulab and Flux hugely successful. To say the least, we'll miss him dearly."
-- Shashi Guruprasad, now at Cisco.

When Jay was diagnosed with cancer, he decided that he wanted to send his last major project, Emulab, off with a bang---and directed his entire, formidable energy to it despite the ravages of chemotherapy. Jay put off telling most people about his cancer for quite some time to make sure that ``his problems'' did not get in the way of Emulab's flourishing---and, I suspect, out of a deep-seated sense of humility and desire not to burden others. Rick McGeer noted:

"I vividly remember one night in February when we were putting finishing touches on a proposal together. We were doing what research computer scientists do---revising text, checking budgets, emailing each other final last-minute edits as the proposal deadline got closer and closer. I remember looking up at the clock in my study in California and 2 AM, and thinking to myself, ``I'm 51 years old, too old to be doing this nonsense---I'm stupid. But it's 3 AM where Jay is, and he has *cancer*. Now that man is crazy''. I didn't say it to Jay, unfortunately---he would have gotten a kick out of that."

Jay's favorite maxim was from Voltaire:

"The perfect is the enemy of the good."

and he was never shy to share this advice with a student or programmer who couldn't step back and see that the issue they were sweating had little to do with the big picture of the project. Jay's other advice, implicit and explicit, was just as practical: It is easier to ask forgiveness than permission. Any paper worth submitting should be started at least the night before the deadline, and sometimes earlier. An eggshell ground pad makes an excellent emergency bed for the office. Despite working insane hours, make time for a two-week river rafting trip in southern Utah to be with your family in a place you love. Be passionate about what you do, and do what you're passionate about.

In the first OSDI (1994), Jay and the program committee invited David Patterson as the keynote speaker. Patterson gave his now-famous talk on ``How to Have a Bad Career in Academia,'' where he noted seriously that the alternative is to ``change the way people do computer science and engineering.'' Clearly, Jay took this advice to heart. In his program chair's introduction, Jay wrote: ``My baby is born; from now on it's up to others to raise it well.'' The same could be said for Emulab, for the many students and staff who Jay helped send into the world, and for the red-rock deserts of Southern Utah. Jay's work is done; now it's up to us.